Each summer, Salzburg hosts a world-renown music festival know as the Salzburg Festival ("Salzburg Festspiele" in German).  The festival was established in 1920.

Visitors travel from around the globe to attend this popular event and to enjoy the best in opera, classical music and theatre.

Performances are held at a number of venues in the city including Cathedral Square and Festival Hall. 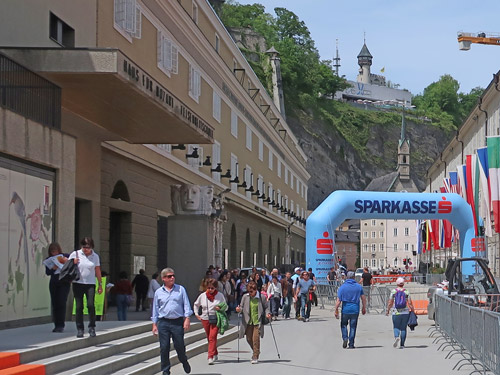 The first Festival Hall was erected in 1925 at a horse stable on the northern foot of Monchsberg mountain.  In was subsequently expanded to include the riding school (Felsenreitshule) located next door.

Visitors to the Felsenreitshule might remember it from the "Sound of Music" (Watch video).  It was used in a final scene where the Von Trapp family performed and subsequently made their dramatic escape from the Nazis.